Last Saturday, Kathryn and I set off to London on a  coach  to complete 3 of my challenges:

Due to a change of plan with going to the Ritz, we were combining 2 and 20; Jordan had given us a Christmas present for the Cookery School in London to do a Cookery course. We picked an afternoon tea course so we were going to be shown how to make and also participate in making tea plus eat it afterwards.

With the show, we put the pressure on Jordan; Kathryn and I gave Jordan the name of 2 shows that we wanted to see and got him to pick one and organise the tickets for us. When we set off, we didn’t know each other’s choices and just had an envelope with tickets in and instructions to get us to the theatre. At the coach station, we told each other the choices.

The Lion King
Book of Mormons

On the coach we opened the envelope. Jordan had chosen Stepping Out with Amanda Holden starring.

To relieve some boredom (and to get back at the fact my theatre choice had been chosen), Kathryn decided that I should have a German lesson. Well, I soon got her back for that; remember Phoebe trying to teach Joey French in one of the Friend’s episode. That was exactly what it was like. My pronunciation was definitely not coming out the same as I was hearing it. By the end of the coach journey, I could almost remember the German for:

I am an accountant
On Wednesday, I dance at Zumba
But last week I read

By the end of Saturday, I remembered nothing. Oh well, another challenge on the way.

We had lots of time before the course started so instead of taking the tube, we decided to walk. Walking instructions are easy to find when you have a mobile phone; following the starting instructions are another matter. No idea what go north on this road means. Needless to say, a few wrong directions but we did find our destination. On the way, we did pass the Ritz. We are going to have tea there one day. 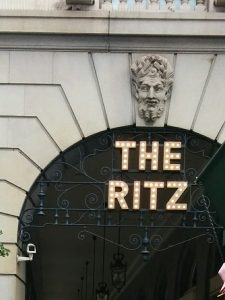 We needed food. I spotted a Slug and Lettuce and decided that would be a good place to go. One of my things now I am 50 is to try to avoid the chains but Slug and Lettuce does give you reasonably priced food and a variety of choices. I went semi healthy and chose a chicken Caesar salad in a tortilla bowl. I wasn’t expecting this but it was nice. 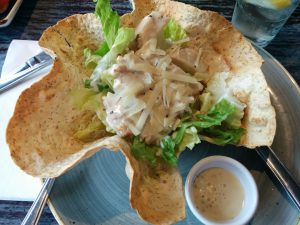 It was then time to get wet. My weather app hasn’t been too helpful recently but it had said rain in London between 12 and 2 so I was prepared. Gave us an excuse to pop into some shops. Then we headed to Little Portland Street for our course.

We were both a bit nervous about this. There were eight of us altogether and the other people were very nice. We had a glass of wine at the start; probably not a good thing for me. Course started promptly at 2 p.m. and we were shown how to make a sweet pastry which we were going to be using for small lemon tarts. Then we were shown how to make bread and how to prove it. Some mixture had already been made to use for some rolls. This was our first job; we were expected to roll into rolls. Now something you should know is I hated home economics at school. I was never going to be a cook and I was happy to give up the subject. Ironic that as soon as I had my own kitchen and, with the aid of cookery books, I began to enjoy cooking. Memories of my dread at school came back and whilst I would never shine in this cookery course, I certainly know I had the skill to pull off some, if not all of the recipes. Some would need practice but in Tina’s way, I will do them.

We were soon filling pastry cases, watching lemon curd and jam being made, getting tips on how to make a ganache (I will be trying this), preparing scotch eggs, slicing and buttering bread (really do you need all that butter) and watching scones being made. It was soon time to eat what had been prepared. With a glass of sparkling wine, we sat down and toasted to our tea. It was all yummy and the cucumber in the sandwiches which had been salted and allowed to drain with a saucer on top, was very good. The rather delicious cake with cream in the middle and ganache on top but it was a little too much after all the other delights.

All in all, the course was very good and I came away with some good tips but I am not sure if I would take part in another course like this. I alway follow recipe instructions but do like to have the freedom to make my own mistakes and learn about them in my own. 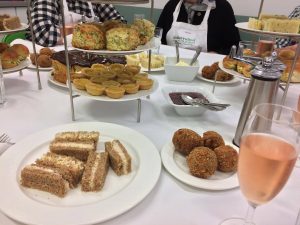 The streets of London were very crowded and Jordan’s detailed instructions to get us to the theatre had to be abandoned due to the station being closed. We thought we would walk there. Once again, directions proved a little difficult to decipher and it probably took us longer to get there.

The show was at the Vauderville theatre situated in the Strand. On presenting our tickets, we were told to see one of the other ladies who would reseat us. I had given Jordan a budget for our seats and we should have been seated in the upper circle. We were changed to stalls and had a great position. Feeling very good for the change certainly encouraged me to buy a programme for my 50th box.

Stepping Out isn’t one of the singing musicals we normally go for but more a comedy with characters who had sad stories to tell but with a very good feel ending. It was written by Richard Harris as a play and later into a film with Liza Minnelli playing a former Broadway dancer. Mavis now teaching a weekly tap dancer to a group of women and one man who have different personal issues but enjoy their one night trying to learn to tap. Mavis hears about a competition and decides to enter the group in it.

I don’t think I have seen the film but it has always been highly recommended by Lana, our Zumba teacher. Amanda Holden, who plays Vera in the production we saw, actually saw the film and decided she would love to act in a theatre production with some of her acting friends.

I was intrigued by the play and I managed to escape to my own little world watching it. It was a play which I laughed so much at but cried too with the pain each character went through. The cast was fantastic and played each character so well. It was easy to miss something going on in the background. The first half is short. The final half longer and leads you up to the finale which you are expecting.

There are so many shows in the West End that it is hard to pick one to go to. That’s why we gave the choice to Jordan. The theatre wasn’t full which is why we probably had a change of seats but I really enjoyed the show and am pleased that we went to see something different.

On starting this post,2 Kathryn has told me that I am not allowed a tick for challenge 20 which disappointed me. With only 12 days left, I don’t think I’ve enough time to fit a different course in. Oh well, guess 2 out of 3 isn’t bad and going to have to get ready for not getting 50 ticks! We did have a lovely day in London.