I have always loved watching the Great British Bake Off. It was a lot more fun to watch when Jordan and Kathryn were both at home to watch it too – we would guess who would be going out and who would become star baker. Although I love baking, I would never be able to put myself through the pressures that the bakers go through. The technical challenge always looked very daunting to me and as for doing a show stopper – what is that about?!

Whilst preparing food for my picnic at the beach with Kathryn, I came across the recipe for jaffa cakes. I hadn’t realised it was the first technical challenge of the new series as I hadn’t caught up with the show. Although I changed the size of the baking tins so my jaffa cakes looked different to the bakers’ finished product, I was fairly happy with my effort. Even managed to have a shiny chocolate finish. It also inspired me to have a go at another challenge. 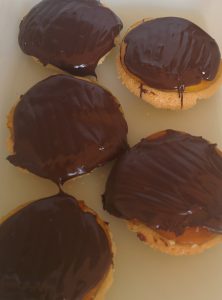 The following week’s challenge was Viennese Whirls and I thought that would be great. One advantage of not being on the show is you do actually get the full recipe. On initial reading, I thought these might be a bit extravagant to make as I needed to buy jam sugar. I put that aside as it was going to be fun to make – somebody had said to me why make jaffa cakes when you can buy perfectly good ones. Why – because it is fun and a bit of a challenge.

Jordan might be 23 but he was keen to help too. So good that my children still want to do these things with me. It might have been August when we did attempt them but it was a baking the day – it was a dreary wet afternoon.

First job was to make the jam. That was quite easy. Whilst I did that, Jordan prepared the baking trays, drawing 2 inch rounds onto greaseproof paper. It was at this point I realised that I had used the wrong biscuit cutter for my jelly for the jaffa cakes the week before. Nobody noticed so I didn’t make too much of a drama out of it.

Preparing the biscuit base was a funny affair. Jordan is still keen to impress so started “beating” the mixture. His version of beating is a bit different from mine – he did it very delicately. I had to take over to get the job done!

Next up was piping the mixture. Again a lot of laughs in the kitchen whilst doing that. We had to pipe swirled rounds not rosettes. Still don’t know what that actually meant but with Chris having a go at the piping too, the baked articles were still impressive.

Jordan had moaned about the fact we had to wash the piping bag to be used again for the butter icing but he still did a good job. We had to spoon jam onto one half of the biscuit then pipe the cream over then add the other side of the biscuit. It was a delicate job but we only had one casualty. 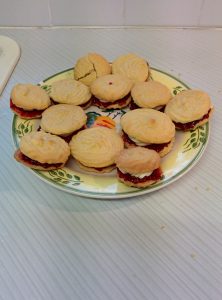 We certainly had a lot of fun making the biscuits and next came the job of eating them. First day, they were nice – actual biscuit was lovely – but quite rich. A few days later, so delicious. Will make again. 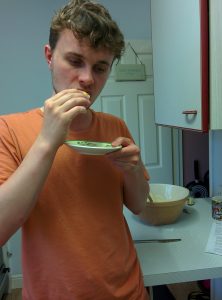 I haven’t attempted making the bread/batter challenges but the pastry challenge is one that I am going to try, probably enlisting the help of Jordan again. It is Bakewell Tart – a family favourite. I do have to purchase a new piping bag – second attempt of washing it last time, Jordan tore it! Will also get to use that jam sugar again.

One thought on “Ain’t No Sunshine So We Baked”