Well I didn’t actually finish my book I started in October for my challenge of reading a different genre each month until November although I did manage to read three other books in the month. I am also ashamed to say that I added 4 more books to my growing kindle library. I think I did get some bargains though!

The first book I read in October was one of Kathryn’s proper physical book. I decided to read Stolen by Lucy Christopher. It is a book about 16 year old Gemma who is kidnapped from Bangkok airport by Ty, a young, fit and gorgeous man who starts talking to her in the airport cafe. 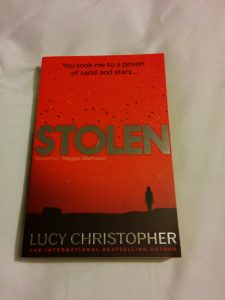 The book is written in the form of a letter to Ty from Lucy. The storytelling is beautiful, and what is strange is I found myself liking Ty, who I really shouldn’t like. The descriptions of the scenery and events were so amazing that you could believe you were in the actual place and be living the experiences especially one of the first scenes with the camel!

There are some books which do not have the ending which is right for the story you have been told. This had exactly the right ending and I am so glad I read it.

For my different genre, I decided to read a bit of a horror story as it was October so I thought before I read that I would have a bit of a chick lit weekend. At this stage I was busy at work, busy preparing for my running challenge and had a cold so I looked through the books I had purchased last October. I had a book by Holly Martin there who is an author I do love. There is always romance there with a little bit of fairy tale which I do like. The book I read and managed to read in a day was The Guestbook. 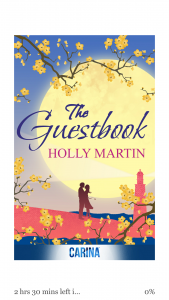 One thing that always makes me talk about a book is when it is written in a different way. This book was different because it was about Willow House, a house rented out by Annie Butterworth. She leaves a guest book for all that stay to write in. The story is written by each guest so you share their experiences as well as Annie’s. Whilst I could never imagine anyone would write all their thoughts in a guest book, reading is an escapism and for a day I enjoyed putting my feet up and reading this.

My next choice was a book called Return to Bluebell Hill by Rebecca Pugh. When I buy a book, I read the description and a few reviews. I had bought the book in October 2015 so there must have been something that attracted me to it. The title was something that I would have liked. I can’t say that I hated the book but I found I couldn’t warm to the characters. A book should make you fall in love with the characters and also dislike them. I did not understand why I didn’t like one of the characters who clearly should have been a sweet likeable person. There was also quite a few flaws too. I don’t often abandon books so did read to the end thinking that one of the main topics of the book would be cleared up.  This did not happen.

My final part of reading of a book is to read some of the reviews again. I was delighted that the first review had all my concerns too. It was the first book by the author but as I have read many first books by different authors, I do not think it excuses the major flaws. I don’t think I will be rushing out to buy any of her future books.

It was now on to my challenge book for October. I went for another first book by an author – this time Stephen King’s Carrie. I had glimpsed the film recently and hadn’t watched it all the way through. Also I had never read a book by Stephen King and thought this would be great to read for Halloween. In the book there was a preface by the author which made me want to read the book straight away. 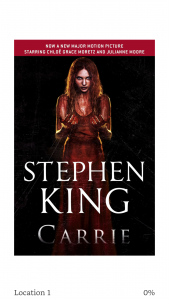 The book actually took me ages to read but in a weird way, I did enjoy it. I liked the way it was written, there were characters you liked and characters you didn’t and I could see the characters had been written as Stephen King had said in his preface. It is a horror story and not the usual type of book that I would read. However, I think I would read another by the same author.

As I did not finish the book to midway through November, I thought I would choose my next book for the challenge. I decided to go for an autobiography. I used to read a lot of these but hadn’t for some time. I had heard Damon Hill’s book being discussed on the radio and being a fan of F1, I thought I might read that one but decided to check out on some of the others first. I was attracted to Our Life on Ice by Torvill and Dean so bought that.

I always loved watching them skate and was very keen to read their story. I remember also watching a documentary where it seemed to highlight Christopher Dean as a bit of a tyrant, It was great to actually read about their achievements in their words and find out the truth. Whilst they shared their personal life with you, it was in a way which could have been anyone’s life – I had certainly been through some of their experiences with children too.

My favourite parts were how they explained how they got together the routines with the music and I was so fascinated with how the first part of Bolero was put together to accommodate the music length. This book was a great read and made me like them even more.

I will buy the Damon Hill because I would love to read that too.

December next and I must have a few Christmas books to read.