Whilst I thought I would love the two reading challenges, I did find them very hard work at the beginning. I have got over the negativity now and have actually found it has changed my reading habits for the better. I now only buy the books I want to read by the authors I love to read. February found me buying one of my favourites, Mike Gayle. That man is amazing; as well as having great male characters, his female characters are brilliant. He gets our species! 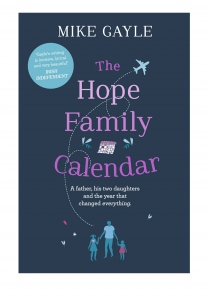 The book I bought was The Hope Family Calendar. It was on a daily special so I sent the link over to Chris as Mike Gayle is one of his favourite authors too. It actually didn’t take me long to read and if I had had time, I would have read it one sitting! It was actually great being able to discuss a book with Chris even if one of the items was about something I felt was an error. Think I might need to read a few parts again before I question the author! Still loved the book though.

I had completed another two books in February before reading this. It might have been a short month and lots of birthdays too but I certainly enjoyed my reading.

First book was I am Malala, one of Kathryn’s top 10 books for me to read. I am still finding physical books hard to read but not moaning so much about it. 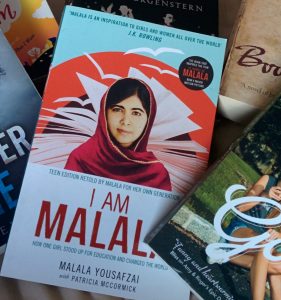 Like most people, I first knew Malala as the girl who had been shot by the Taliban because she wanted to go to school. As a “white British girl”, I have taken it for granted all that I have. I am not just a female expected to clean the house and bring up a family. I have the choice to be educated to a high standard and have a successful career. Malala was born in Pakistan whereby females are treated differently. Malala was lucky though: her father ran a school and treated her as an equal to her brothers, and encouraged her education.

Her father was very outspoken about the Taliban especially about the restriction they were putting on education, particularly female education. Inspired by her father, Malala started writing a column under a pseudonym for the BBC Urdu service about fears of her school being attacked and education rights. Both father and daughter received death threats but continued to speak out.

I’m not sure if I would have read this book if I had not been given this challenge: having said that, I feel much more educated for having read it. Malala describes herself as being just an ordinary girl who fights with her brothers and since coming to England, liking cheesy wotsits. I actually believe she is a brave girl who I respect and admire. I will enjoy following her story.

My choice for my February read for a different genre was an Agatha Christie read. I had never read any of her books although I had sometimes seen a Miss Marple or a Poirot TV programme whilst visiting my mum. Jordan had read Murder on the Orient Express at Christmas so I thought that was where I should start. Not the first of the Poirot mysterious but perhaps one of the famous, Hercule Poirot is on the Orient Express when it comes to a complete stop because of a snowstorm. At this time, a dead body is discovered. His fellow passenger has been murdered and Poirot is called upon to investigate. 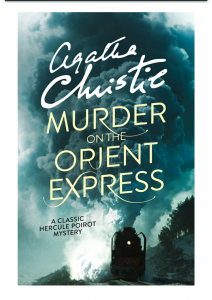 I chose this particular book because I love the romance of the Orient Express and it was February. I have fallen in love with mystery of this type of book and do plan to read the collection from book 1. I was actually relieved to discover that my plan to have a pen and paper ready so I could hopefully solve the crimes was shared by Jordan. Perhaps we are both mad!

A very enjoyable February reading month. Now I must go and read my March choices.