Thursdays have had a bit of change of routine for me this year. I actually went out for the first two which is a change for me on a “school” night.

The first Thursday of the year, Chris and I enjoyed tapas at Antonia’s restaurant. We had been given a voucher from Kathryn and Aaron for Christmas so decided to use that up.

The second Thursday of January, Jordan booked us tickets to see the first showing of La La Land. Jordan is big on films and watches all trailers for new films. He showed me the first trailer some time ago and at first I didn’t see the attraction. Second trailer was released and I was hooked. As well as the dancing and the music, the two leading actors attracted me to it. I don’t remember watching their previous films but both looked natural people and I liked that about them.

I still didn’t know what to expect from the film but was looking forward to it. As this was the first performance, the film wasn’t on until 9 p.m. (on a school night and a very cold one at that).

What can I say about the film? It is a 2 hour film which actually surprised me at the end because I enjoyed it so much, it didn’t feel that long at all. The film started with a singing number whilst sat in traffic. I would certainly loved my commute to work if we all started singing along – that was a bit of make believe there (or la la).

The film centres around Seb (gorgeous Ryan Gosling) who is a jazz pianist (although doesn’t find many opportunities to play it) with a dream to open a jazz bar and Mia (lovely Emma Stone) who is trying very hard to find her break into acting. Well I would have hired her after her first audition but I must remember it is a film! Seb and Mia meet and are drawn together as they encourage each other with their dreams.

The film is like an old familiar musical with a modern theme and I enjoyed every moment of it even the ending! I loved Ryan and Emma’s singing and it was a lovely surprise when I realised the actor playing Seb’s friend Keith was John Legend. Didn’t work that out until he sang!

With this film in mind, last Thursday saw me at home on my own so I thought I would enjoy the night by starting on another challenge: 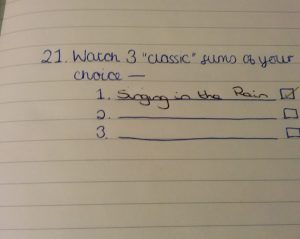 I settled down to watch Singing In The Rain at 7.30 whilst continuing my cross stitch. I consider this film to be a classic as it was one I would have enjoyed watching with my Nan. I absolutely loved it and I fell in love with Debbie Reynolds. I am a great fan of the 1920s fashions so as this film is based around 1927, I just loved the dresses. All the songs were so familiar too so it was great being able to sing along. As well as enjoying the film, I did manage to get some stitching in. I might just change my Thursdays to a film and stitching night. 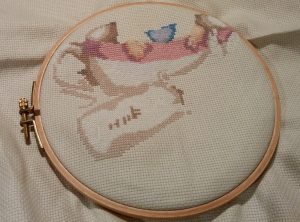