Since my post of Amazing, I have now finished reading Summer of 76 and read a further 2 books. Not read as much this month due to a busy work load. Hopefully I will make up for that in August.

Summer of 76 carried on to be a slow pace read but enjoyable too. It never visited Brighton where Luke was going to be going to Brighton Polytechnic. I particularly love the fact they were polytechnics then and do remember them being that. Now of course, they are universities.  As I was only 10, I think I was disappointed when the rain fell after the heatwave of 1976 which is still talked about now. I wonder if I would feel like that now if I had to work in that heat. There was a slight twist in the plot which I had worked out in the middle of the book.

Once finished, I was able to start on After You by Jojo Moyes, the follow up to Me Before You.

I was looking forward to catching up with Lou and was so hoping she wasn’t going to let me down. It had been 18 months since we left Lou and we are brought up with what happened in that time in the first few chapters. Considering the subject, I was still surprised with how Lou had been treated by family and friends and that is probably because my opinion is quite open on the subject raised in Me Before You.

The Lou I had loved so much had changed but I was very optimistic she was still there. When a young girl seeks questions from Lou, the question Lou needs to find out is she really who she claims she is. Can she answer all the stranger’s questions and can she start living again.

Reading it brought many tears but also laughter too. This time I found that I was reading the book in the voice of all the characters Me Before You film!

My next book was to continue with challenge number 5 – read a book each month of a different genre that you don’t often read. I had downloaded a few books ready for this but then there was a book on Amazon’s daily deal that caught my eye. It was on a subject I had heard about in the news but I must confess that I was very ignorant about – Female Genital Mutilation (FGM). The book is written by Hibo Wardere and tells her story about the procedure forced on her when she was 6 years old whilst she lived in Somalia. Hibo was left bitter towards her mother and didn’t learn the truth about it until a civil war in her country forced her to become a refugee in our Country.

Despite the horrific procedure, Hibo has gone on to have 7 children. She had told her husband that she would not allow her daughters to have this procedure and although they both faced opposition from their families, they made sure their children were kept safe from this.

Hibo was finally able to open up to what she had gone through after being asked to attend a meeting, at the school where she had started working, between parents of one of the students, whereby the headteacher suspected the student was going to be taken out of school and flown to their homeland to be cut. Hibo decided to share her story as part of an assignment for her job and also with her three eldest children. This actually lead to Hibo becoming a FGM campaigner to help prevent girls being taken out of this country for this treatment and also to make people aware of this being a British problem.

I would never have chosen to read this book if I had not been given this challenge and would have remained very ignorant about this barbaric procedure. I can not understand why anybody would put their daughters through this.

I also greatly admire Hibo and also the wonderful people that she talked about who are trying to prevent young girls having to go through this. This book is a must read.

I decided that I needed some lighter reading so thought I would start to  tackle challenge 6 – read 10 of your daughter’s favourite books in paperback.

This is quite frightening as first of all I have to try to keep the book in the same condition as my daughter keeps them – pristine. This means they won’t come out with me in my bag! Also, how do you drink a cup of tea whilst trying to turn the pages of a book. I have the kindle down to a fine art with that. Before the kindle, I read proper books so I’m sure I can do it again.

I have chosen to read a book by Giovanni Fletcher – Dream a Little Dream. I will update how I get on with this task later. 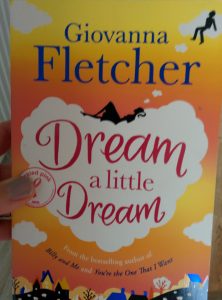 For the month of August, it is the turn of my son to choose a book for me. I am hoping he doesn’t get me to read his current read.

As you can see from the picture, he has trouble travelling on the tube and keeping it pristine. I can’t understand why my children don’t get a kindle!