Since reaching 50, I have been able to watch films without falling asleep which is a big thing for me.  I tend now to only watch what I want to and also do something when I am watching.  Can even cross stitch too.

I have even been to the cinema four times and only paid for one of them.  Technically with the help of Tesco club card and Nectar I have though.  I have seen Me Before You, Ghostbusters (love those women) and Finding Dory which is a must for two 50 year olds.

The funniest film that I have ever seen and never stopped laughing so much, has got to be Bridget Jones’s Baby. I went along with Chris.  It was a packed cinema too and Chris was a bit of a minority in the audience.  There were probably only three men there. There are so many funny moments that when I talked about the film with Kathryn, I had forgotten about the man that worked at Starbucks! Trying not to give that away.

Bridget, played by Renee Zellweger, has grown up but still capable of getting herself into lots of trouble.  I so want her to be her.  Colin Firth is back again with the bumbling Mark Darcy and I can’t give anything away about Hugh Grant.  It was great to see the return of the old cast plus the gorgeous if not naughty Patrick Dempsey and one of my favourite’s, Emma Thompson.  I just love her.  It was probably the best of the three Bridget Jones films but I still love the other two. The soundtrack is wonderful too.   I now want to try the old glamping thing out. 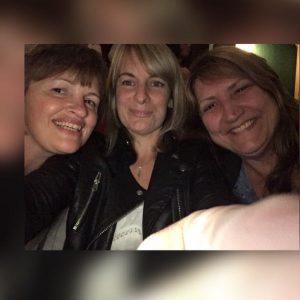 The same week was an annual visit to the theatre with my two friends, Kelly and Leanne.  This is our third show and we have previously seen Wicked and Stomp. This time it was the foot tapping Mamma Mia with all those fantastic Abba songs.  We enjoyed our usual pre-dinner and wine at Nick’s Restaurant before heading to the Mayflower theatre.    Mamma Mia is definitely a show you see with a group of people and you want to go along for a jolly evening.  It certainly had great reviews and as it was the first time in Southampton, I knew plenty of people going to see the show.  There were a few groups who had dressed in the 70’s Abba outfits and I certainly missed out on wearing my 70’s hat I had bought for an Elton Tribute night. 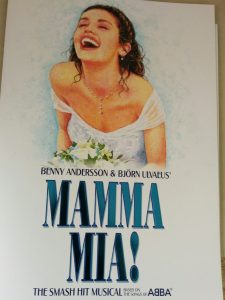 I had seen the film and loved that.  The show did not disappoint and it was not hard to dance along to the music.  The actress who played Donna had an amazing voice and her two friends were very entertaining.  Wish I could do the splits like Rosie.  The three possible fathers were just like the characters from the film.  I loved the friends singing Super Trouper but I have no idea why but I do love Our Last Summer sung by Harry. I think it is the Colin Firth connection from the film.

It was the very good evening and a most enjoyable show.  Just have to plan our next year’s big night out.