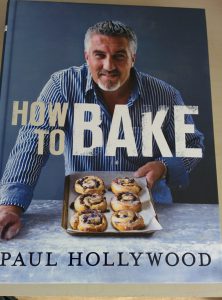 First of all, about Paul Hollywood. When I first saw Paul Hollywood on Great British Bake Off, he came over like a Simon Cowell type judge of the baking world; the villain you want to hiss at like you would in the pantomime. Just like Simon Cowell, he is the bad boy you can’t help liking and all contestants want to impress. Jordan has bought me two of his books, the one I was using for the croissants and British Baking. I have used British Baking more but both books do have a good layout; the croissant recipe explains what ingredients to use and there is a step-by-step photograph section. Easy stuff!!

First part of the recipe is easy enough. The good old food processor was used and the instructions are very clear for this. The first part of the dough was made easily. Croissants take a long time to do because there is a lot of chilling to do; the dough needed to go in the fridge for an hour. 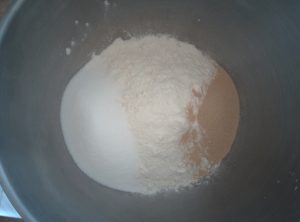 Next part didn’t seem too difficult but I didn’t achieve what Paul was asking. The butter has to be chilled and you have to bash it with a rolling pin. I did not have the skills for this at all. Not to be put off, I consulted other books; my favourites let me down and didn’t have any recipes but the food processor book did. It said to dot the with butter. I took that method but folded as Paul’s recipe. I was not convinced and, at this stage, I thought I was doing this recipe for a tick and would never make croissants ever again. The shop over the road sold them so why should I! I put the dough back in the fridge for another hour.

I had to roll out and fold into three, three more times chilling for an hour in-between each folding; the dough, not me! I was at this stage thinking are these ever going to be edible. To make up for the likelihood of them failing, I baked a Victoria sponge just to prove I could bake! 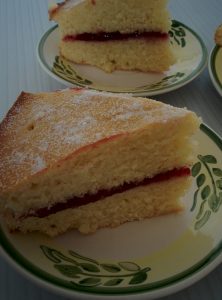 After the last roll out and fold, the dough had to be put back in the fridge overnight. Despite my changing the method a little, I did actually think that it did look like Paul’s photo so was hoping it would turn out okay. That didn’t stop me waking up at 6.15 a.m. and rushing down the stairs to check I had added the yeast correctly at stage 1. Huge relief when I found I had.

The final process of making the croissants needed to be done; rolling the dough to a particular size, cutting the pastry into 12 triangles and then rolling up into a croissant. I had convinced myself this would be hard but it was much easier. Had to leave to rise for 2 hours before baking. By 9.50 a.m. we had croissants which, surprise, surprise, looked like croissants and tasted like them too! 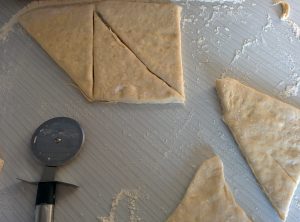 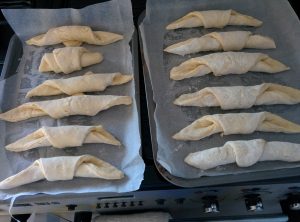 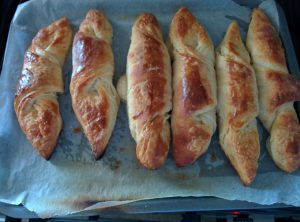 I ask myself the question again; voulez-vous faire des croissants? The answer is yes I will make you croissants. Would you like normal, almond or pain au chocolat?