I have a confession, I am (or was) a spend-on-bookaholic. I would get the e-mail from Amazon with the daily deals and I would put all sorts in for 99p. Why do I have that 1 click on Amazon! I could get through 4 books a month so I did read a few of them. Well since this challenge, I can say that I am nearly cured. 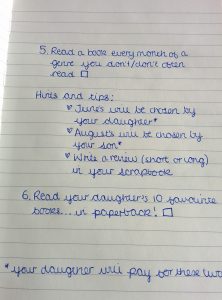 In September I read just 2 books. I decided for my different genre challenge that I would read a classic. Most classics are free so I have downloaded quite a few intending to read them but never doing that. Last September I did read To Kill a Mocking Bird. It was a bit of a tougher read but I enjoyed it. I decided to read Wuthering Heights by Emily Bronte. 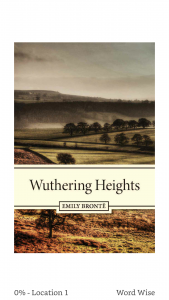 I was very ignorant about what I was reading – just remember the Kate Bush song which seemed to be at the top of the chart forever. I started it eagerly. It was a slow start and I didn’t get into until Ellen Dean (Nelly) starts telling the story. Even then I found the story tough – I think it was not liking the main characters, Heathcliff and Catherine. I don’t think I have ever hated the main characters so much. It took me three weeks to read the book and I curled up on the sofa after my day out in Brighton, determined to finish it. In the end, I was so glad I made it through and the ending was everything I wanted. Maybe I will read another classic next September! 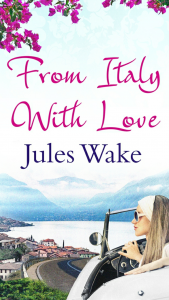 The second book I read is the reason I made my bold statement at the beginning. It was the only book I purchased in September and that was because it was on my wish list and had gone down in price. It was a book called From Italy With Love by Jules Wake. I had previously read From Paris with Love and hadn’t realised that it was the second book in a series. It can be read separately but there are a few spoilers for the first book. That said, it didn’t spoil it too much and I really enjoyed it. Pleased to say I loved all the characters in it. The main character, Laurie, is left a vintage Ferrari by her eccentric Uncle Miles. In his will, he sets her a task of driving it to Italy with a co-driver, the rather tasty Cameron.

It is a great trip from England to Italy and I enjoyed experiencing the places visited. Also the transformation of Laurie; she has a quiet life with a steady job and reliable boyfriend but on the trip finds the fun loving  zest for life that she had as a child.

Having read the second book I did know the ending but it was so enjoyable getting there. Great to see the meet the main characters of the second book in this one. There is a third book coming out, From Rome With Love, which is out in January. I have pre-ordered it so maybe I am not cured after all!