I have only got 4 days left until deadline day. In my job, I often have deadline day, and whilst my new job still has deadlines, I don’t have anywhere near the pressures of my last job. The day I left my last job wasn’t just a day of bringing a cake in and saying goodbye; I worked until home time (actually I think I worked later), with the added pressure of a power cut thrown in. A little bit of pressure makes you stronger, right?! So midnight on June the 6th (or should I say 12 a.m. on June the 7th), I will hopefully have completed 50 challenges.

So what have I been up to the last 5 days. Well I would love to tell you I had completed most of the challenges but that would be fantasy. I have been exhausted but it is time to get on with the show! Actually I had spent most of the bank holiday weekend cooking for one of the challenges I have made a little harder on myself. Challenge number 8 was to host a MacMillan Tea Party. I did make a lovely cake for Macmillan coffee morning and take it into work. We raised £11 but I didn’t think that was good enough for the challenge.

There are so many charities that I would love to raise money for but I do think it is hard to ask for people to part with their money. Charity runs etc are brilliant but sometimes I think if a person is actually taking part in the event, and charged for it, it is a bit easier. Kathryn and I paid £10 each to do a 3 hour zumbathon in April; got fit, had fun and helped raise £1,000 for 2 charities on a Saturday morning. 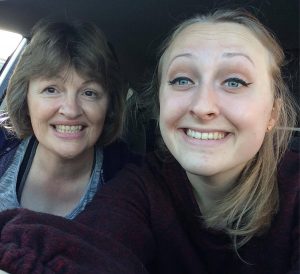 Our local radio station have a special charity called Cash for Kids to “support local children under the age of 18, who are financially, socially, emotionally or physically disadvantaged”. They hold auctions, collect Christmas presents, wrap and present to the less fortunate, hold quiz nights, take part in local event etc. One of the fundraising events I wanted to take part in was the 1,000 faces where you have to raise £100 in whatever way you want. You have to do it by December. I decided to change challenge 8 a little bit, signed up and instead of going out with family and friends, invite them round and ask them to donate something to cash for kids. The grand total so far is £75 (would love to have made £100 by D day but it will be a great excuse to continue). Here are some of the things I have done so far:

Lunch with Leanne and Kelly (first try of cheesecake. Dessert of 2017)

I do plan to continue having people round; it is hard work but so worth it. My food is made with love so hopefully it tastes as good as what we would have in the pubs, restaurants and cafes. Everything I have done so far has been relaxed (once the cooking is done that is!) and I am enjoying it.

With a little help with my friends, we can hopefully raise a bit more than £100 whilst gaining a tick for the challenge. Tomorrow is the 10k run; I have a poorly foot but if I can’t run it all, I will walk it.

P.S. Kathryn let me have the course challenge.